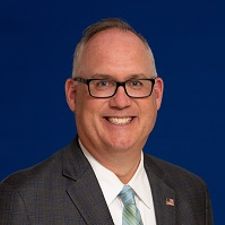 Ed Peper was named U.S. Vice President of General Motors Fleet in 2012.  In this position, he has overall responsibility for building relationships and growing sales with GM’s fleet and commercial customers. In 2019, these customers accounted for 22 percent of GM’s total U.S. annual sales volume.

Peper started his career with General Motors in 1984 as a Cadillac District Sales Manager and has held a number of sales and marketing management positions since then.  From 2005 to 2009, he led Chevrolet, GM’s largest brand.  During his tenure at Chevrolet, he launched 22 new products and led the brand to total U.S. sales leadership in both 2005 and 2007.  From August 2009 through 2011, Peper served as General Sales Manager for Cadillac, where he was responsible for leading the Cadillac field organization and dealers. In that position, Peper helped restore Cadillac’s sales and customer satisfaction momentum and built great relationships with its dealers.

In his current position, Peper has reshaped the business model by growing sales and share in key market segments, putting a greater emphasis on conquest sales and providing business solutions that offer customers more value.  In doing so, he has grown commercial fleet sales 35 percent over the last five calendar years.

Keynote: The Future of Connected Vehicles and a Data-Driven Fleet

Ed Peper, U.S. vice president of General Motors Fleet, and Michelle Calloway, director of OnStar Business Solutions for General Motors, will sit down for a fireside chat to discuss how organizations with fleets can take advantage of new technologies with the connected car. More Info